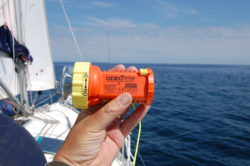 With huge thanks to Peter Gallienne (ex. Royal Marine) and Nick Vass (Marine Surveyor) for a serious test of the ODEO Distress Flare in rough weather over a four month period. We list the ODEO with a visibility of 6nm, but we know it can be seen in good conditions up to 10nm; here we even have visibility up to 12nm. The below text is from Peter’s notes.

“The test was done with 9 people all together over a four month period, so as to get the right weather for the test.

The weather included from F1 clear to F9 with rain.

The test was carried out with three men on the shore line 1 mile apart. Three boats were used, an old lifeboat a yacht 34 ft and our own Colvic Watson 32.

The shore tests were done with a boat at sea which was 3 miles from the shore and proceeded to increase the distance until the flare was no longer visible.

The flare was set off at deck height and was visible at 9 miles but was not clear after that.

The Flare was then hoisted to the top of a 40ft mast with the Flare orientated upwards. This was visible up to 12 miles then lost.

F9 light rain deck flare vis was intermittent at 9 miles which was due the sea state and the yacht falling in big troughs, at 6 miles it was vis all the time from the mast head.

A further test was done in fog, we were lucky to have three boats out at the time we had two flares at deck level and one mast height. Visibility was 1 mile at 1.5 miles we lost the flare but could still see the reflected light signal up to 5 miles and in the dark it was about 6 miles the mast flare was a little better but not a lot.

On the foggy day we had a friend take his plane up at a height of 5000ft he could see the reflection well but could not pin point the vessel.

On a clear day we sent him up again and asked him to start at 1000 ft and gradually gain height to his max of 10000ft. He said the flare was visible all the way from bottom to top and could pin point the vessel. He then flew at sea level straight at the flare and assured us it had no adverse effect on his vision.

This what I mean when I say I test things for myself in all conditions to make sure I am giving my clients and friends the best advice on products that I recommend.”